This week, Beneful got a lot of press over a commercial that recently started airing in Austria.  How does a dog food commercial create such a buzz?  Well, the Beneful commercial was one of a kind because it was intended to grab your dog’s attention, not yours.  Woven through the commercial are squeaky toy squeaks, dog whistle-like sounds, and high-pitched pings…this all according Nestle itself.  Some of these noises you will be able to hear…some are meant just for your pooch.

While dog lovers (myself included) surely think this is a wonderful idea, others (one would assume these “others” to be those odd breed of humans who don’t have pets) are trying to hate on this ingenious idea.  They argue that televisions for humans (ok, all TVs) can only play sounds at 20,000 Hertz while a sound “only dogs can hear” registers about 40,000 Hertz.  They also argue that dogs don’t have money and therefore can’t buy the food for themselves.  These haters then point out that not only do they not have money, they don’t know how to talk so they can’t even ask you to buy Beneful for them!  (The Meow Mix song just popped into my head as I was typing that…all of a sudden they seem like marketing geniuses.) 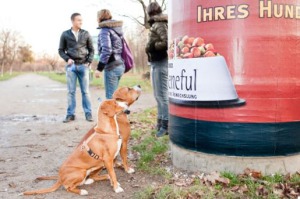 I personally think this is a wonderfully clever idea.  First of all, it’s getting a lot of dog lovers talking.  Second, it has the potential to be very effective.  If I walked into the room, and my dog was 100% focused on what was playing on our TV, I would definitely take notice.  Just like I would take notice if I ever encountered one of Nestle’s “Stop-Sniffing” posters.  You can only find them in Germany, but when I read about this I thought they were GENIUS!  The posters smell like Beneful.  Oh my gosh!  Seriously!  That is AWESOME!  What an amazing idea….and can they make them for humans?

Even after hearing and reading about the commercial, though, I had my doubts that dogs would actually pay attention to it at all.  I needed to perform my own observations, but where would I possibly find a pooch to participate in my not-so-scientific research?  Oh yeah!  I got one right here!  I played the commercial (which I have posted just below so you can conduct your own experiment) for a half-asleep Buffy, and she perked right up.  She even started looking at my computer screen (something that rarely interests her.)  I was shocked to see that it really did instantly grab her attention….although by the end of the ad she was yawning and contemplating her next napping position.)

But no naps for Buffy just yet!  The Nestle website (the German one at least) has “Dog Type Test.”  By using sounds found in the commercial, you can discover if your dog is more “playful rascal” or “sensitive dreamer.”  Buffy reacted to all of them with curiosity and intrigue (although I think she was leaning more toward “playful rascal.” ) I seriously recommend trying it with your pup.  It was fun, and all of the sounds got adorable responses.  I would love to hear how people’s dogs reacted, so let me know!

While a dog food commercial that caters to dogs might not be the most practical marketing strategy, I do think that it is definitely a sign that dogs are becoming more and more a part of our families – and therefore more influential in family purchasing decisions.  If I thought that spending a few extra bucks on a different dog food would make my pup happy, I would do it without a second thought.   And I wouldn’t even mind that she couldn’t front me the cash or thank me for doing it.