You’ve made it half way through your week!

In a post about heartworm, I mentioned a recent trip to the Houston S.P.C.A.  As many of you readers and friends guessed, my husband and I did not leave empty-handed. I would like to use this Wags & Whiskers Wednesday post to introduce you all to the newest member of our family, Amigo! 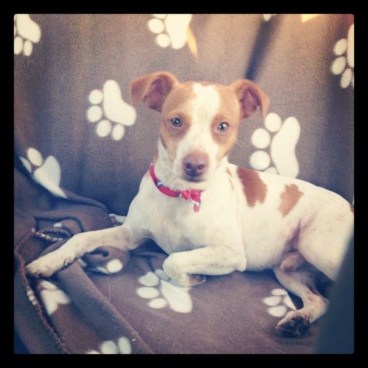 This was not a spur of the moment decision (as adopting a dog NEVER should be), but rather a plan that had been forming for a while.  Our beloved Buffy had…and I write this in the most loving sense…become a lazy bum.  Where there once had been endless energy there now was never-ending napping.  A girl who had been eager to start every day was now impossible to drag out of bed.  I don’t think it was depression; I think it was simply a “well, there is nothing better to do” mentality.   My husband and I felt that despite the hours and days our work schedules allowed us to spend at home with Buffy, we just weren’t enough fun.  Give her another dog to play with, though…and she would romp until she dropped.  Hmmm….we thought….she needs a friend.  Enter Amigo. 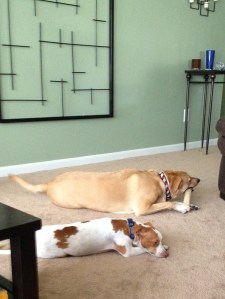 Like typical siblings, they always want the same toy at the same time (despite the fact that there are more than enough for both!)

I won’t lie and say it has been totally and 100% easy, but for the most part….the transition has been smooth.  I waited to formally introduce Amigo to my blog readers because…to put it bluntly…I wasn’t sure he would work out.  This 14 pounds of chihuahua mix stole our hearts from the moment we laid eyes on him.  (He was literally the first dog we saw at the shelter, but someone else was taking him out for a “get to know you” walk.  Disappointed, my husband and I assured ourselves we were walking into a building FULL of adorable pups…but there was something about him that we just couldn’t shake.  Luckily, those other people were stupid enough to put him back in his cage!)  From the get-go, we agreed the final decision would be made by Buffy.  If Buffy didn’t like him, he would have to go to back and we would try another pooch.  I was constantly asking “Do you think Buffy likes him?” and “So, are we going to keep him?”

After about a week of asking, my all-knowing, ever-patient, sweetheart of a husband turned to me and said – “Do you really think there was ever a chance that we (and I’ve no doubt Buffy was included in this “we”) would ever take him back to that shelter?”

I wasn’t even fooling myself.  He was exactly right.

And Buffy and her Amigo have been inseparable ever since!