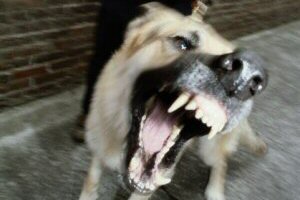 Recently, I have been doing a lot of reading, researching, and blogging about the origin of dogs and their evolution from wolves to four-legged family members.  While domesticated dogs are certainly not the wild animals their ancestors were, we humans should not forget they are still animals.

Last week, one of the dogs I visit every day bit a woman in the face. (Thankfully not on my watch.)  When I first started walking “Spot” (the pup’s name has been changed to protect his identity), he was not very pleased with a stranger coming into his house.  His mother had been honest – the reason I was called in was because Spot had just bitten a man (a stranger), and the man had to get stitches.  Spot’s mom was hoping that introducing me would kill two birds with one stone – Spot would get use to interacting socially with a human AND burn off some energy which would help him be calmer and more balanced overall.  Being extremely experienced with “difficult” dogs, I was up to the challenge.  And a challenge it was!

Spot (who weighs about 120 pounds) growled, snarled…and basically did everything a dog can do to say “get the hell away from me!”  It was easy for me to see right off the bat, though, that he was really just a big baby.  He was terrified of anything new or unknown.  I took it slow.  First, just getting close enough to his crate without him getting agitated.  Second, getting him comfortable with me touching him enough to get his harness on.  Finally, gaining his trust so that he could relax and we could both enjoy our walks together. (Again – he was scared of anything foreign…and too a dog this can be a squirrel, mailman, or kid on a bike.)

Over a year later, Spot was a changed man.  This dog is filled with puppy-like excitement when I come in.  He even gives me kisses…something I wasn’t sure he could ever be calm or gentle enough to do.  He is so relaxed on our walks – no cat, dog, yard worker, or screaming child can rile him up.  I was so  proud of his progress.

But back to the bite.

Spot’s mom was entertaining a friend in her apartment.  This friend had been warned that Spot was aggressive, and that he should not be touched.  So, what does this woman do?  This woman approaches Spot, puts her face in his face, and tries to give him a kiss.  SERIOUSLY?!!?

Now, I know some people think that I should not be standing up for a large, aggressive dog that bit a woman in the face…but is the dog really to blame here?  When a friend introduces you to someone for the first time, do you chit-chat for a few minutes and then try to KISS THEM?  Why would anyone think that this is the appropriate way to deal with any dog (or human!) especially an aggressive one!  Yes, 98% of dogs are go-with-the-flow, happy-go-lucky balls of fur that will not bite you…even if you have no manners.  That still doesn’t mean you should not abide by doggy etiquette.  (Rule #1: Don’t get in my face!  Especially if I don’t know you!)

Something that was so easily avoidable is now causing so much pain.  The woman who got bit is (understandably) very upset.  Spot’s mom is worried about her dog and her injured friend.  Spot is now working with a dog behaviorist…but of course that is a stressful, mentally draining endeavor for a poor, already fearful dog.  And I am just plain mad!  All our (me and Spot’s) hard work….gone!  Just because someone thought that they were “the One.”  “The One” the dog would instantly love and connect with.  “The One” that would break through his tough exterior and prove how much of a “dog person” she was by kissing that gentle giant right on the mouth.

So, to answer the question “How do I NOT get bit in the face?”:

One thought on “How to NOT Get Bit in the Face”